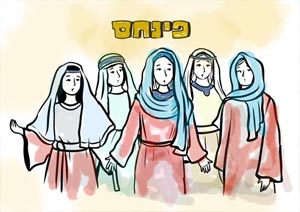 This week’s Torah portion, Pinchas (Pinehas), frames like no other parasha the problem of biblical religion’s relationship to violence, particularly zealotry and vigilantism. Number 25:11 Pinchas son of Eleazar son of Aaron the kohen has turned away My anger from ther People of Israel because he was very zealous for Me among them, so that I did not put an end to the People of Israel in My zeal. This is not merely divine applause; it is a godly standing ovation. God credits Pinchas  with saving the people from extermination by plague and grants  him and his future as a leader of the people through the office of the High Priest. All of this is wrapped within a pact of Shalom between God and Pinchas.

This parasha provides an example of vigorous action in total devotion without considering one’s actions first.  Pinchas did not consult any one, but acted decisively by the zeal he has to walk by the fear of the Most High God, as soon as he saw wrongdoing.

Pinchas displayed extraordinary courage and resourcefulness when faced with the incapacity of those who witnessed the sin, yet he when it comes to going to battle, scripture describes him as a spiritual God fearing leader who holds the holy utensils and blows the trumpets, as a true warrior who stood in the forefront of the camp with his spear.

Pinchas showed devotion to his soul’s limit and was rewarded with a "pact of Shalom" between him and God, for the name of Abba is Peace, as it is written (Judges 6:24): "... called it A-donai-shalom." For the same reason Pinchas also received a pact of priesthood for all time, to minister before the Lord.

He was placed in command of the spiritual battle, teaching us an important lesson in the ways of military and social leadership.