This is the genealogy of Noah. Noah was a just man, perfect in his generations.
Noah walked with God. 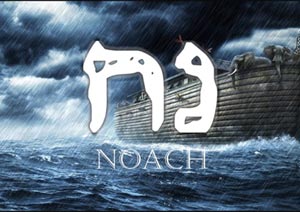 “Noah had a death sentence sealed against him. But he found favor in the eyes of God.” In other words, Noah was not so different from rest of his generation, but God chose to save him because of God’s own grace, he was a just a man, and was considered righteous and he is far from a perfect hero. He seems distant from others, both his family and his neighbors, and does not even attempt to argue with God or to build a coalition of the righteous to avert the calamity. He gets right to work on his ark project, immersing himself in the myriad details required to make it float, but fails to convince skeptics about the dangers or the decisions demanded to avert disaster. In the face of tremendous threats, Noah focuses on technical details, failing to reach the hearts of his potential audience.

After the experience of surviving the flood, Noah is a changed man. Once the rain stops, Noah tests the waters by sending out a bird from the ark. The first one quickly returns, unable to find a dry spot on which to land. The second one returns with an olive branch, an indication that the water has begun receding. The third one does not return, suggesting that it has found sufficient dry land and no longer requires the safety of the ark.

Once he regains his footing on dry land, Noah’s first action of his own volition is to thank God. Noah is left with a broken world in the wake of the flood, but, expressing a survivor to hold the freedom to choose how to respond, Noah builds an altar on which to offer a sacrifice to God.