“Speak to the children of Israel, saying: ‘In the seventh month, on the first day of the month, you shall have a Shabbat-rest, a memorial of blowing of trumpets, a holy convocation. 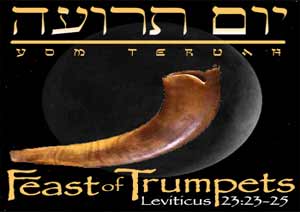 Feast of Trumpets is also known as Yom Teruah, is observed on the First and Second of Tishri, the celebration included a series of over 90 trumpet blasts and increase for a final blowing of blasts on the climax of the celebration, the Teki'ah Gedolah, the Great Blowing.

A distinguishing feature of the celebration is the last, climactic blast, the Teki'at Shofar. This is not the usual series of short bursts, signaling alarm or bad news. Rather, it is a long blast, signaling victory or good news.

So, just what is this "last trump"? Since Paul was of Pharisaical background, it has been suggested that he was alluding to the climactic trumpet of the Feast of Trumpets and that, perhaps, this feast is prophetic of the call of God's people: Romans 11:5 Even so then, at this present time there is a remnant according to the election of grace.

The Feast of Trumpets is the only Feast of The Lord in which the arrival is dependent upon the confirmed sighting of the new moon before it can officially begin, this countdown timer is timed for sundown (Jerusalem Time) of the evening preceding the first day. However, this feast may not officially begin until the following day or evening.