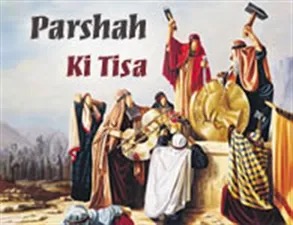 The notorious centrepiece of Parashat Ki Tisa is the episode of the Golden Calf. The Israelites, at the base of Mount Sinai, grow impatient, imagining the worst vis-à-vis Moses’s fate. They turn to his brother Aaron and demand, “Come, make us a god who will go before us, for that man Moses, who brought us from the land of Egypt—we do not know what has happened to him” (Exo. 32:1). Aaron collects gold rings, wantonly creates a molten calf, and declares a “festival” of burnt offerings to the Lord. Upon hearing the commotion from the Israelite camp, God commands his servant to return to the people. In a fierce moment of Divine anger, God verbally disowns the Israelites, turning to Moses and calling them “your people.” Indeed, God vows to destroy them. Moses, however, rises to the occasion to masterfully intercede on behalf of the people. Rhetoric wins the day as Moses declares, “Let not the Egyptians say, ‘It was with evil intent that God delivered them, only to kill them off in the mountains and annihilate them from the face of the earth’” (Exo. 32:12).

Moses knows well he must serve as both a messenger of God and as advocate of the people. He must learn to play both sides and both roles effectively. In the absence of such juggling, he will surely fail as prophet and as leader. More than that, he has mastered the art of appealing to Divine emotion.

God, at the prodding of Moses, needs to learn patience with this newly freed people. The slave mentality will eventually give way to a mature and enlightened freedom, but it will take time. Moses learns this well as the people’s earthly leader; and God, as their heavenly guide, must also take this lesson to heart. Truly, Moses’s empathy of God and profound ability to be a sounding board for emotion saves the day. Indeed, God vows to destroy them but Moses, rises to intercede on behalf of the people, as Moses declares, why let the Egyptians say, ‘It was with evil intentions that he led them out, to slaughter them in the hills and wipe them off the face of the earth’? Turn from your fierce anger! Relent! Don’t bring such disaster on your people” Exod. 32:12.

We treat the Torah scroll as an idol in our congregations when we parade it gloriously through our synagogues on Shabbat, but don’t internalize and put into practice its teachings of justice. The problem with idols is that instead of serving as symbols of holiness, they replace holiness.