These are the accounts of the Tabernacle of the Testimony, as they were recorded according to the commandment of Moses, by the service of the Levites, under the hand of Ithamar son of Aaron the Priest 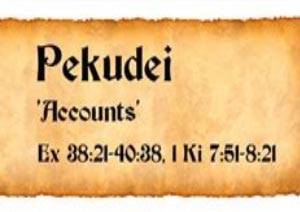 But not for long. After the incident of the golden calf, Moses moves the Tabernacle outside the camp—an apparent rebuke to the people for their insolence and “stiff necks.” Still, the Torah states that anyone who seeks God can step out of camp and approach the Tent of Meeting. Indeed, everyone could watch Moses doing just that, speaking face to face with God, who appeared in the guise of a cloud, Exo. 33:1-11.

The divine glory has departed the camp, but not gone too far. All it takes is willingness to step outside to where the cloud and the glory await spiritual seekers.

The precise awesome moment on the mountain when we read the dramatic closing lines of Exodus:  For the cloud of Adonai was on the Tabernacle by day and a fire was there by night, in the sight of all the house of Israel throughout all their journeys.

After all the effort to design, build, and assemble the Tabernacle, the divine glory enters the structure as a cloud, driving out Moses and obscuring the sacred precincts from view. In the priestly sections of the Torah, the divine glory (kavod) is enveloped by cloud cover, apparently to protect the people. Divine presence will no longer be limited to the mountaintop but will be accessible to all, right in the center of the camp.

God chooses to dwell in a thick cloud. We thin that the divine presence is hidden, but the absence is only apparent. In truth we each have points of access, both inside and outside the camp, in nature and in culture, in solitude and in community.