Then Moses gathered all the congregation of the children of Israel together, and said to them, these are the words which the Lord has commanded you to do: 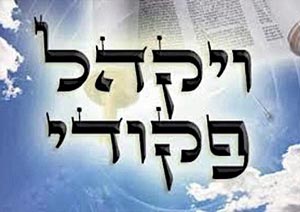 The Book of Exodus ends with the instruction of how to travel in the wilderness, and to follow the Lord as a guide through the harsh land of Sinai that will lead them to the Promised Land, the land of Canaan that God had promised to Abraham, Isaac, and Jacob and their seed forever.

Considering how incredibly sparing the Torah is with words, it seems strange that this portion should spend so much time simply summing up what was said before. The Mishkan-Tabernacle- was the continuation of the revelation of God. As God spoke to Moses from the top of the mountain, so He continued to address him from out of the Mishkan.  The Tabernacle was a place of continual revelation, where the presence of God was felt and experienced vividly.

The way in which the Lord will dwell among the Israelites is specified in this week's reading: "The cloud covered the Tent of Meeting, and the Presence (kavod-Honor) of the Lord filled the Tabernacle. Moses could not enter the Tent of Meeting, because the cloud had settled upon it and the Presence of the Lord filled the Tabernacle" (Ex. 40:34-35). The identical description is given of the Temple built by Solomon in Jerusalem, as we read in the haftarah: “Now when the kohanim-Priest came out of the Holy Place, the cloud filled the House of Adonai 11 so that the kohanim-Priest could not stand to minister because of the cloud, for the glory of Adonai filled the House of Adonai.” I Kings 8:10-11 TLV