This is to be the law concerning the person afflicted with tzara'at on the day of his purification. He is to be brought to the cohen. 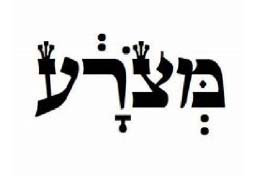 Shabbat Hagadol: is the Shabbat before Pesach-Passover-and commemorates the 10th day of Nissan, when the Hebrew slaves took the lambs that they were going to offer for Pesach and tied them up outside their homes, to keep until they offered it on the 14th (Ex. 12:3-6).

Parashat Metzora is mostly devoted to the sacrifices that those who have been affected with leprosy must bring after they are cleansed.  Despite this extensive concern with leprosy, these readings do not explain even obliquely the reason for the uncleanness of leprosy or why this disease strikes human beings. In cases of a skin affection is most careful to do exactly as the Levitical priests instruct you.  Take care to do as I have commanded them.

Remember what the Lord your God did to Miriam on the journey after you left Egypt. The Bible also contains two stories about lepers who showed respect for the authority of the Lord’s prophet:   Naaman, commander of the Aramean army, who had leprosy, took lightly the instructions given him by the prophet Elisha, but later, when he finally listened to the prophet, he was immediately cured (II Kings 5:1-14).   Having been taught a lesson, he therefore proclaimed that “there is a prophet in Israel” (v. 8).  The second story is that of the four lepers outside the camp, by the gate of Samaria (II Kings 7), who in the end brought deliverance to Israel.   At first, when the prophet Elisha prophesied during the siege and famine, “This time tomorrow, a seah of choice flour shall sell for a shekel at the gate of Samaria, and two seahs of barley for a shekel” (II Kings 7:1), he was taken lightly and mocked.  And lo, by the agency of these four lepers the words of the prophet came to be fulfilled before the eyes of all.