Now the Lord spoke to Moses after the death of the two sons of Aaron, when they offered profane fire before the Lord, and died; 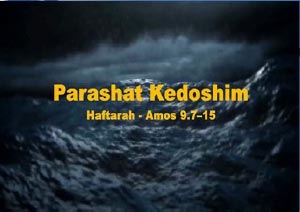 The chapter begins with a striking heading: “God said to Moses: Speak to the entire assembly of the Israel and say to them: ‘Be holy, for I, the Lord your God, am holy.” The text lends this chapter special weight when it instructs Moses to gather the entire people to hear it, something that does not often occur in Leviticus, which is mostly directed at the priests.

Indeed, many of the instructions laid down in Chapter 19 would, if observed, produce a society of very high standards: Respect your parents; leave part of your harvest for the poor and the stranger; do not steal, embezzle, or lie; don’t oppress your fellow man; don’t delay payment to your employees; don’t curse the deaf or trip the blind; don’t pervert justice; don’t go around bearing tales; don’t nurse a grievance, take revenge, or hold a grudge; respect your elders and protect the stranger; don’t cheat in business; and, in the middle of the chapter, the ringing and nearly impossible challenge to love your neighbor as yourself.

By analogy, when we are told “Be holy, for I, the Lord your God am holy,” the meaning would be that we are commanded to separate ourselves, meaning separating ourselves from every other way of lives that is not in accordance with the Bible.

The injunctions to be holy would imply that, as God is separate and different from the world, we are expected to be different from world in holding ourselves to a higher standard. We are in the world but of the world...